What to do in Mikulov?

WHAT TO SEE IN MIKULOV?

Are you looking for things to do in Mikulov? Where to go for dinner or places to visit with your children? Mikulov might be a small town, but it offers many great opportunities to explore.
You certainly won’t be bored in Mikulov and its surroundings. You might want to enjoy a glass of wine together with delicious food in a pleasant restaurants. And you can spend your days actively, there are historical sights nearby, bicycle paths or wellness. All you have to do is choose one of our carefully picked tips.

The Mikulov castle is a dominant of the town you can see through windows of our apartments, but even other places, connected with rich history of the town, can be visited.

Kozí hrádek was built as an artillery tower to serve as a strategic place of control over the Mikulov castle and trading paths between Brno and Vienna. Thanks to that, Mikulov gained an excellent defensive power in whole region of central Europe. You can tell whether the place is open or not from away – if the flag is out, you’re welcome.

The educational trail of the Jewish Quarter will take you through the streets of Renaissance houses with original vaults; the houses in Husova Street are cultural monuments. The interesting fact it that the houses of the Jewish Quarter were marked with Roman numbers I to CLXIX to distinguish them from Christian ones. A frequent phenomenon in the ghettos used to be the so-called condominium, ie the real division of the house into several individual owners, both horizontally and vertically – descriptive numbers were then divided into a, b, c and beyond. The mikveh is also part of the educational trail – it was used as a symbol of a ritual cleanse for Orthodox Jews before the beginning of every Shabbat and holidays. In addition for women, it was used after menstruation, before the weddings and after birth. You can learn that end even more on the educational trail, that leads through the city center and is connected to hiking trails.

This nature reservation is one of the most popular places in Mikulov and its surroundings. You can find very rare plants here as well as protected animals. The way of the Cross will lead you to the top of Svatý kopeček up to the pilgrimage chapel, the bell tower and the tomb of God. The reason for building the Way of the Cross was to express gratitude to God for overcoming the plague epidemic that threatened Mikulov in 1622.

In the north of Mikulov you will find a place that is one of the oldest nature reservation in the area of ​​today’s protected landscape area and the Pálava biosphere reservation. The cave can be reached on a nature trail, and the cave takes approximately one hour to explore. The Turold educational trail is accessible throughout the year and is largely the same as the Turoldu Cave. We recommend that you use the red hiking trail, which is the most interesting.

Visit the town square, which was built at the end of the 16th century mostly in the Renaissance style. The square is decorated with a fountain, which serves as a source of water for the inhabitants of the inner city, a statue of Pomona decorated with house sign of Dietrichsteins. The Holy Trinity Sculpture, the Knight’s Sgraffito House and canonical houses await you on the square as well.

This gem lies on a limestone rock cliff, which provides a unique view of the whole Mikulov. During its history the castle burnt down several times, but demanding repair works saved the main landmark of the town. The most interesting places include the chateau library and the hall of the ancestors. Nowadays, the chateau is the seat of the Regional Museum in Mikulov, which offers, among other things, night tours during the summer holidays. Weddings with a unique view of the Holy Hill are also held in the castle garden.

In South Moravia we know that life is much more pleasant with good food and drink. In Mikulov you will find plenty of nice restaurants, cellars and pubs with various types of cuisine. 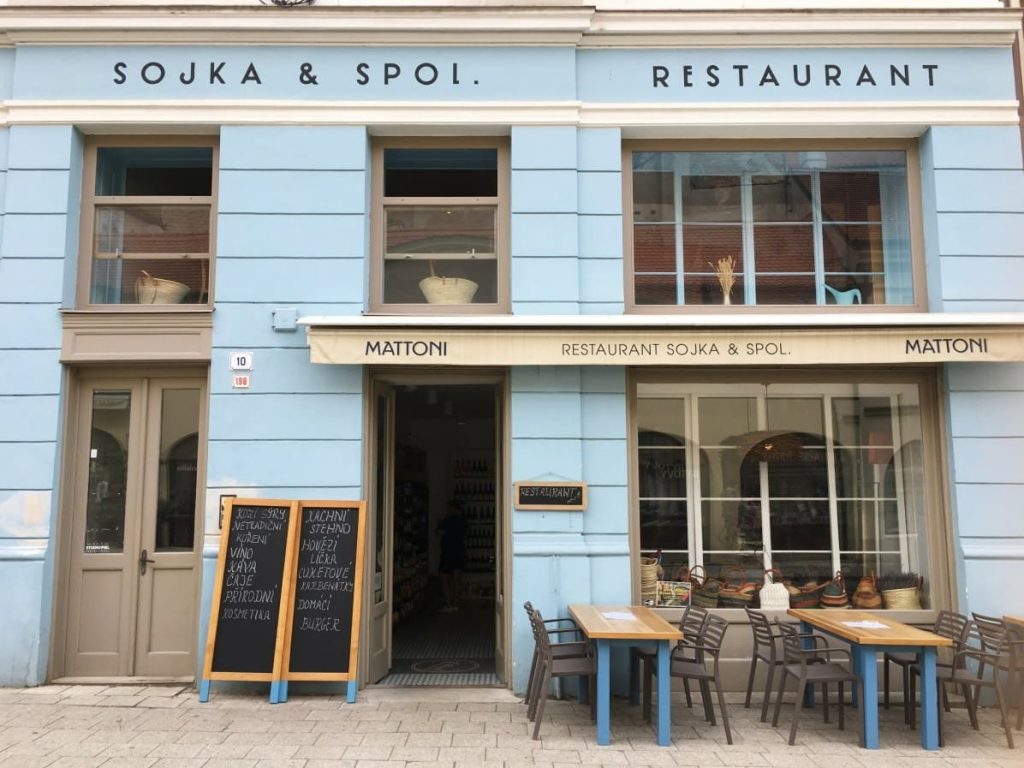 A place where you not only eat well, but also can take home delicacies. Part of the bistro is a shop with wine and food from local farmers. Fresh and local ingredient are used in the kitchen and they also think about vegetarians.

From the title it is clear what is the main draw of this place. You can choose from a large number of delicious cheeses. And both from the local producers and the best of the foreign ones. You can also buy a fine wine that goes with the cheese and enjoy a pleasant evening. 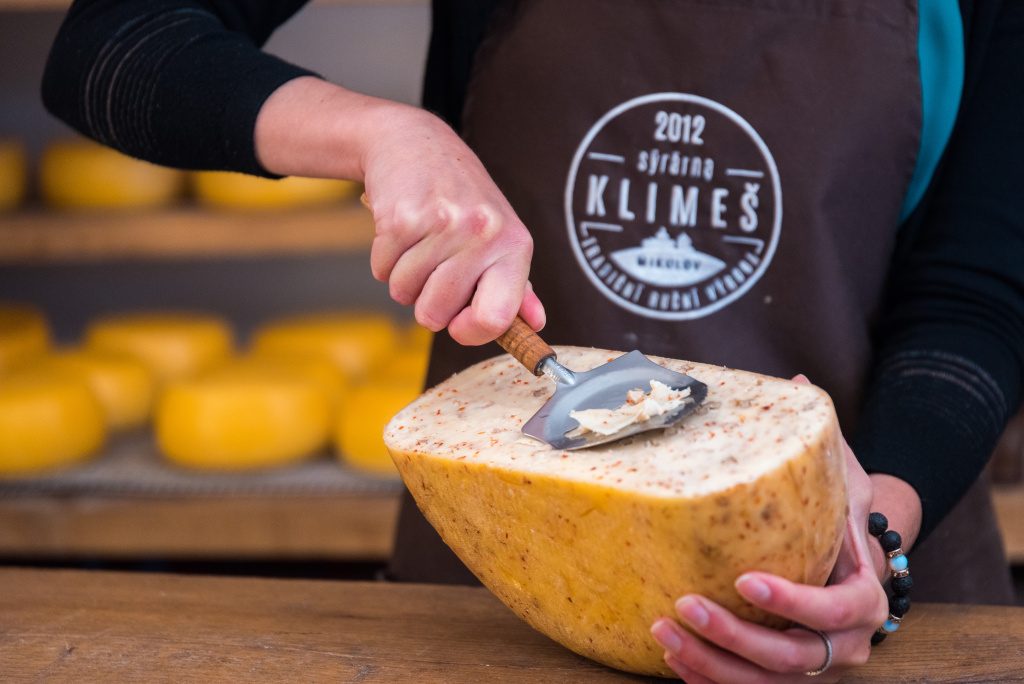 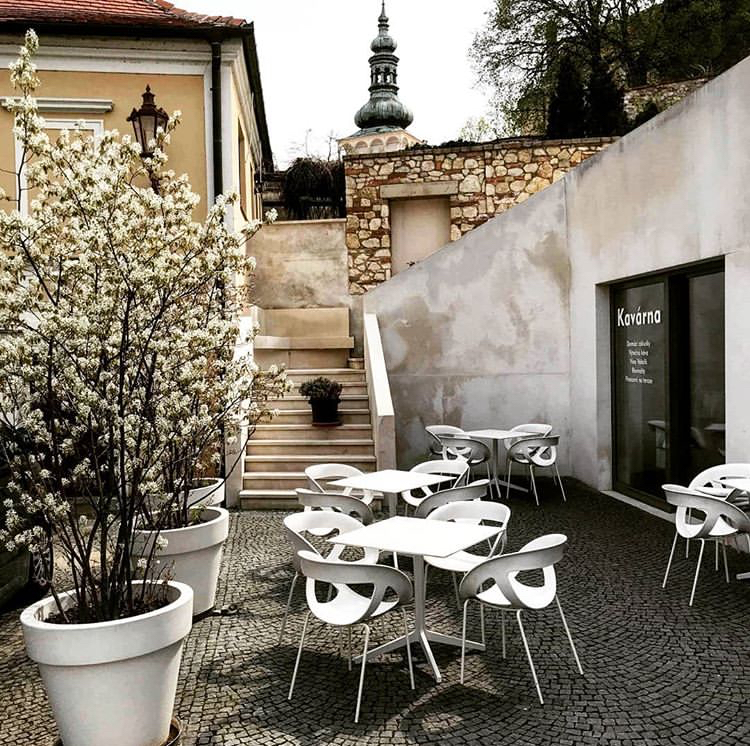 Combination of culture and coffee in the heart of Mikulov. This pleasant café is part of the gallery. Along with selected coffees, you can also enjoy home-made desserts and pastries, which are based on a seasonal fruit. And here, of course, you can have good wine, in the summer months on the sunny terrace under the castle walls.

A truly minimalist restaurant where you can enjoy a selected coffee in the spring and summer months. In this case, specifically Bulgarian coffee. In the stylish wooden hut you will also get wine, beer and limo. The company has already made such a name that it got to the well-known Gastromap of actor Lukáš Hejlík. 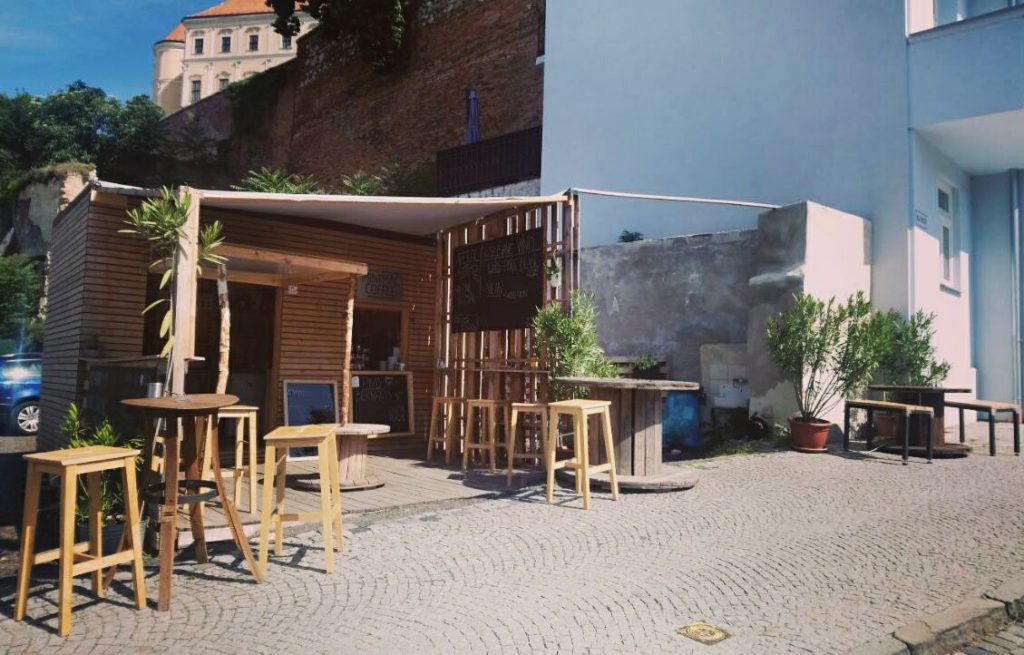 When relax, it’s all in. Wellness lovers will also be pleased in Mikulov. 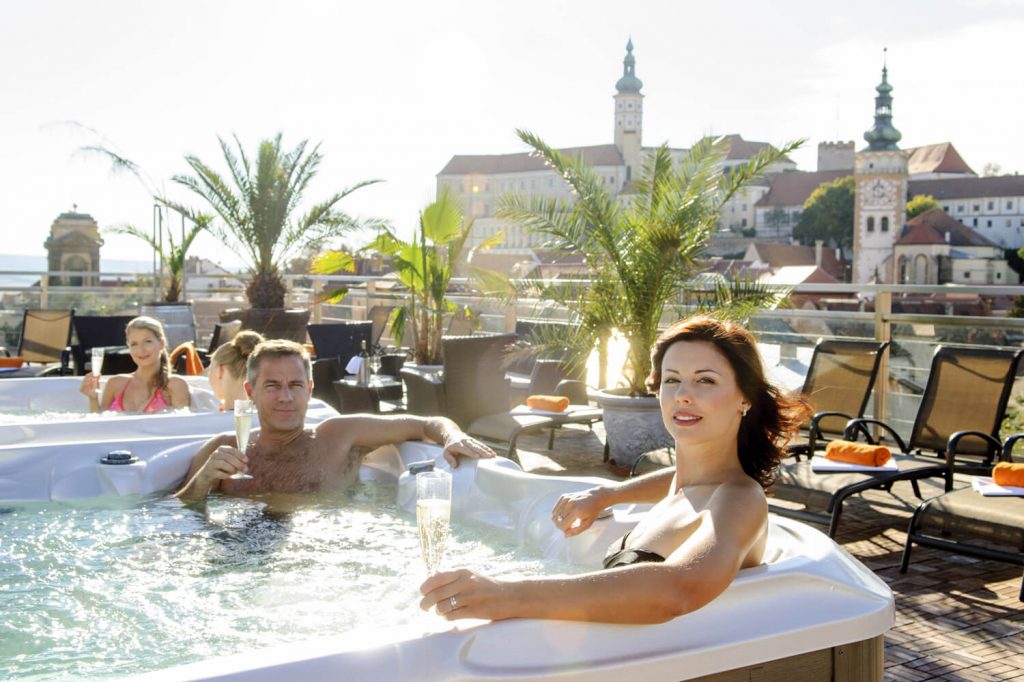 Two minute walk from our apartments is a place called Galant wellness. You can enjoy beautiful views of Mikulov from the rooftop pool. You will find everything you need to relax, including two types of saunas and massages. While there, you might also visit the beauty treatments and of course the whirlpools.

Do you belong to people who like to explore the world from a bicycle saddle? You are in the right place, in Mikulov and its surroundings we have several beautiful bike paths.

Almost 40 kilometers long route will take you on a pleasant ride through the Mikulov surroundings. Most of the route leads through lowland of Pálava, so it is suitable for families with children. You will go through eight villages in the microregion Milkulovsko, so there are plenty of opportunities to stop and rest. And in Novosedly you can go around the small circuit of Stará hora educational nature trail, where you will learn something new about viticulture.

more information about the circuit: here

Although this trail is more than 80 kilometers long, its profile is also not so difficult. On the way you will come across the most beautiful places of the region, which we write about on our site. You will see the Turoldu cave and get to see Lednice and Valtice or to the ruins of Dívčí hrady near the popular village Pavlov. About half of the route will take you on quiet third-class roads, the other half on groomed bike paths.

Queen of wine cycle paths. In this case, you probably stop in Mikulov for only one day. It is not a circuit, but a 290 km long route that crosses the entire wine region of South Moravia. You start in Znojmo and drive to Uherské Hradiště (or vice versa). You will visit a lot of beautiful places, but we believe that in Mikulov you will like it most.

more information about the road: here

The route of this trail is simply contained in its name. Around Novomlýnské reservoirs you drive just over 30 kilometers and this path is certainly suitable for children. The advantage of this trail is that on hot summer days it is always close to the water in which you can cool off.

more information about the road: here

Mikulov is beautiful in itself, but in its surroundings you will also find magical places. If you spend more days here, make sure to take a nice trip.

For many years the most visited South Moravian monument, which perhaps does not even need to be introduced. Lednice chateau with its large and rich garden is one of the most beautiful complexes not only in the Czech Republic. Where else can you find the Moorish minaret next to a pseudo-Gothic imitation of the castle ruins? You can also visit the greenhouse with the most precious greenhouse flower in the country – a five hundred-year-old cycad. Lednice is located about twelve kilometers from Mikulov, so you can comfortably get there by bike.

When you say Lednice, many people immediately think of Valtice too. After all, under the protection of Unesco is the entire Lednice-Valtice area. In this wine-growing town you can also see a beautiful chateau with a park, but it is worth visiting the neo-Renaissance town hall as well. And of course the wine cellars, which is probably the most typical thing for this place.

If you are coming here this summer, we have good news for you. In Mikulov and its surroundings there are plenty of places to go to the water for a swim. And some of them are open all year round.

The Mikulov swimming pool is close to Vienna. From the pools you can see directly Mikulov castle and Holy Hill. In addition to classic bathing, you can take a long toboggan. The swimming pool is open from June to August and the entrance fee is very pleasant.

A place for lovers of natural swimming. Flooded limestone quarry nearby Svatý kopeček offers beautifully clean water. However, it is also part of the natural monument Janičův vrch. So please behave carefully around the nature there. 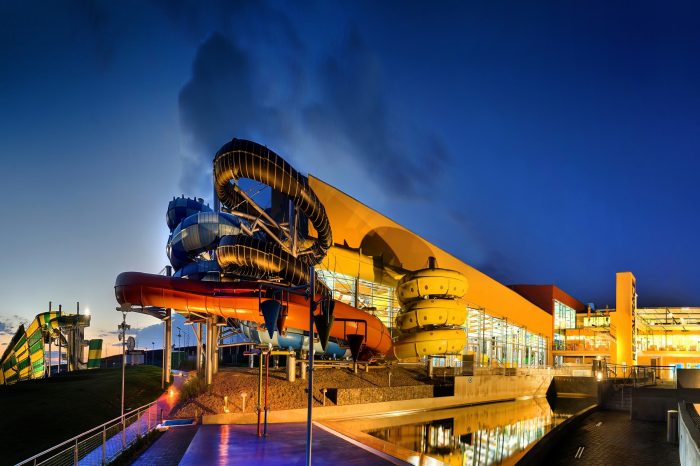 The largest South Moravian aquapark can be found nearby Pasohlávky. You can have fun here all day long. If you want a little adrenaline, you can try a variety of water slides and other water attractions. If you are looking for a bit of peace, you will find everything you need in the relaxation zone. 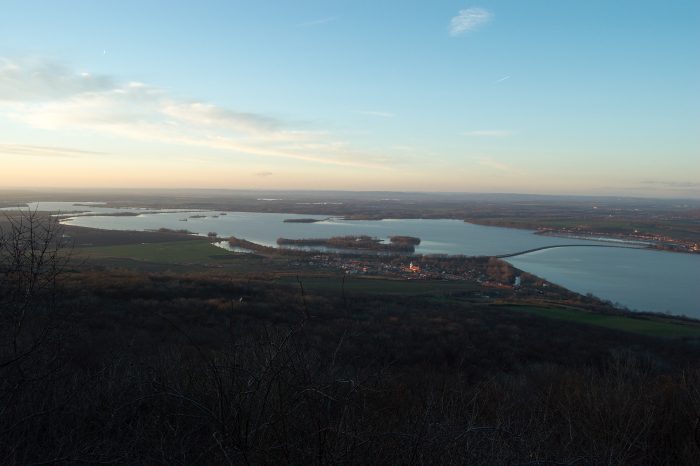 A large reservoir, which offers not only classical bathing but also a lot of other fun. You can try paddleboards or water ski train. There are also many restaurants around the reservoir, so you can easily spend the whole day here as well.